Enchilada, is a corn tortilla rolled around a filling and covered with a chili pepper sauce. Enchiladas can be filled with a variety of ingredients, including various meats, cheese, beans, potatoes, vegetables or combinations. Originating in Mexico, enchiladas are popular dish throughout Mexico and American West.
In New Mexico, red Enchiladas, and green enchiladas are fried with an egg, is a basic recipe found in many cookbooks, and inside the minds of almost every cook in the southwest who has ever made them. Red enchiladas are a New Mexico variation where the enchiladas are stacked with a filling between each layer, green, and red sauce poured on and there is a fried egg on top. This is a truly traditional New Mexican dish. Enchiladas were a typical ranch house food early on, replicating the Mexican kitchen’s custom of almost always having food on the stove. 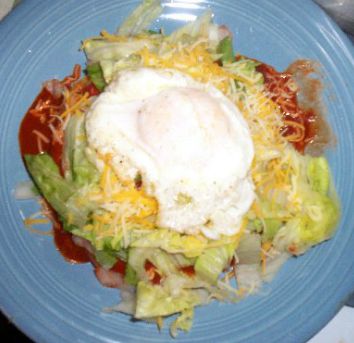