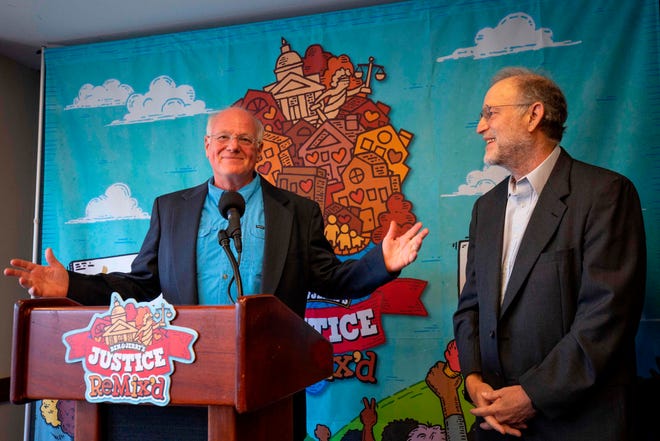 SANTA FE, NM: Policing reforms are making for strange bedfellows in New Mexico as the co-founders of Ben & Jerry’s ice cream and the conservative-backed nonprofit group Americans for Prosperity lobby for a bill to eliminate police immunity from lawsuits on civil rights violations.
Ice cream entrepreneurs and civic activists Ben Cohen and Jerry Greenfield on Tuesday joined an online news conference to promote the proposed policing reforms that would allow civil right lawsuits against local officials in state courts.
Cohen said he hopes the bill will be approved and serve as a model for police accountability movements in other states. He called police brutality a “white problem.”
“People who we authorize for the use of force in our name need to be more accountable, not less,” Cohen said.
The proposed Civil Rights Act from Democratic state legislators is confronting near-unified opposition from a long list of sheriffs and law enforcement associations.
The bill builds on the recommendations of a civil rights commission, chartered by the Legislature and Gov. Michelle Lujan Grisham in June as protests over police brutality and racial injustice swept the nation and Albuquerque, New Mexico’s largest city. The state House has endorsed the proposal, and the state Senate has until March 20 to send a bill to the governor.
Recent amendments to the bill would cap damages at $2 million and allow lawsuits against agencies only.
Cibola County Sheriff Tony Mace is warning that civil rights claims in state court would shrink available local spending on law enforcement and unfairly brand individual officers as a liability. He said officers and deputies feel they are under attack from a variety of legislative proposals.
“The general consensus across law enforcement, across the state?” said Mace, chairman of the New Mexico Sheriffs’ Association. “It’s an all-out attack on law enforcement.”
On Monday, Americans for Prosperity announced a petition and advertising campaign in support of reforms to police immunity provisions. The group is connected to the primary political organization supported by billionaire Charles Koch, whose organizations have spent hundreds of millions of dollars supporting Republican candidates and conservative policies. Full credits AP.